There’s a saying amongst the RunDisney / Disney Running gang:

(Dead last finish is better than did not finish is better than did not start.)
We flew to Minneapolis yesterday to run a half marathon in Minnesota: my 38th state. A few weeks ago I did something — I seriously don’t know what — to my right knee. I thought it would go away if I just took it easy, but it didn’t. Three weeks later and it still hurts, is swollen, and I can’t bend it. The slightest twist sends shooting pains up my leg. I finally decided I should see my doc, then discovered that the first in-person appointment is 31 May. Yep, 5+ weeks out.
And, of course, I had this race trip planned.
So we flew out, picked up a car, and drove out to adorable White Bear Lake.
Well, first we made two stops in MSP:
1. Mary Tyler Moore statue. 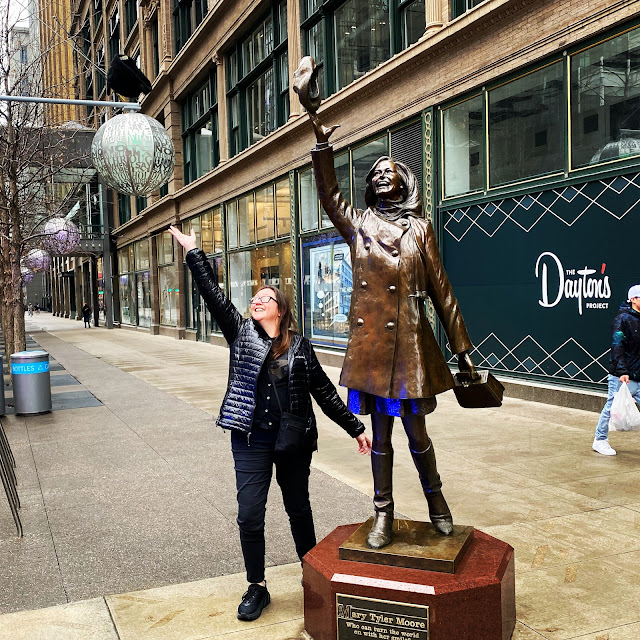 Yeah, I brought a hat SO I COULD THROW IT NEXT TO THE STATUE. #loveisallaround
2. The Herbivorous Butcher 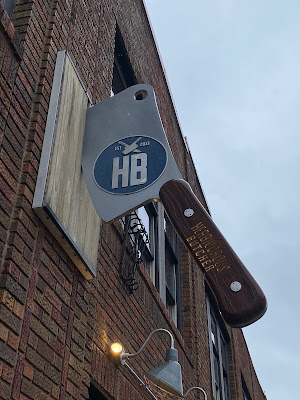 (We're vegetarian, not vegan, but we bought sandwiches for a late lunch, as well as a lot of their stuff to bring home!)
Then White Bear Lake, where we checked in to our hotel, went for a little walk, got ourselves organized for the next morning, went for a swim, and were asleep by 10am.
Saturday morning we drove the two miles to the Bald Eagle Recreation Area for the start of the Camp Wannarun Half Marathon. 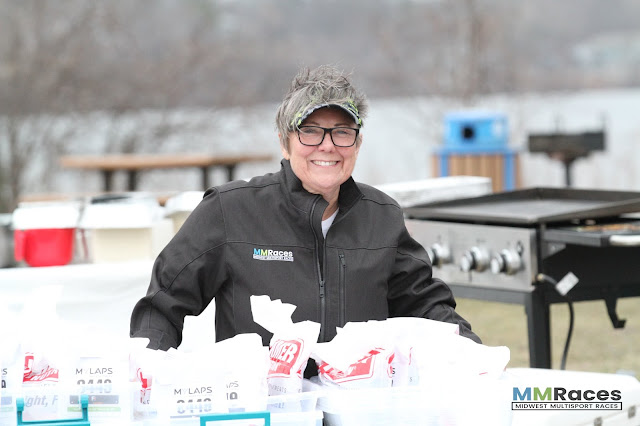 First and foremost -- Judi Fluger and her team at Midwest Multisport put on a really nice race. A small company, they somehow put on more than 20 races a year -- everything from 5K fun runs to a 70.3 triathlon. Their branding is clean and consistent, their registration and pre-race communications are great, and the swag is great quality. I had emailed Judi to ask a question and mentioned that I was working on a 50-state project and this would be my 38th state. So I was thrilled to open my packet and see bib 38. Maybe it was a coincidence, but I assume Judi was just being super thoughtful. We also got cute shirts and custom metal medals -- really nice!
Judi gave a quick pre-race talk about the course and the markings ("Sunny, you won't get lost!"), we lined up at the back, and the small crowd set off. I knew from looking at previous years' results that we would be at the back of the pack, especially given my knee. But I hadn't realized that after the first major turn, about 2 miles in, we wouldn't see another runner. 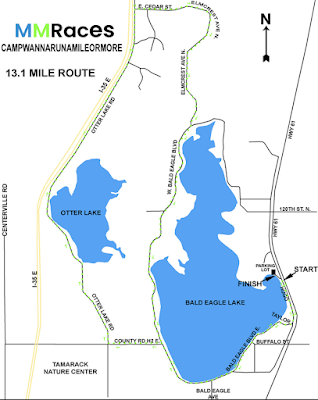 But the course was well marked, mostly on small rural roads, and essentially flat. So we walked. Relatively quickly, mind you, with a good 15:06/mile pace, and chatted and smiled and enjoyed the day.
Before we looked at weather reports -- the temperature would be in the low 70s, with afternoon thunderstorms starting at 4pm. We were maybe 5 miles in when we heard a long rumble. Wil asked what the noise was, and I said, "Maybe gunfire? People hunt around here...." (I realize that spring probably isn't hunting season...). We heard it again, and I said, "Maybe it's planes taking off? We're not super far from the airport...". And then, when we kept hearing it, realized it was thunder. Lots of thunder.
Where there's thunder there's lightning, and intermittent downpours. But really it wasn't too bad. We did the old "count the seconds" trick and decided that the lightning was never closer than 12 miles away (please don't tell me that counting the seconds doesn't work, okay?). We're from Seattle, we've walked and run and just generally spent time outdoors in the rain. Besides, it was pretty warm out.
Every so often we would interact with someone -- a police officer at a road crossing, a volunteer at a water stop, but other than that we were on our own. Well, us, large squirrels, birds, and some excellent lawn art. And it was pretty. 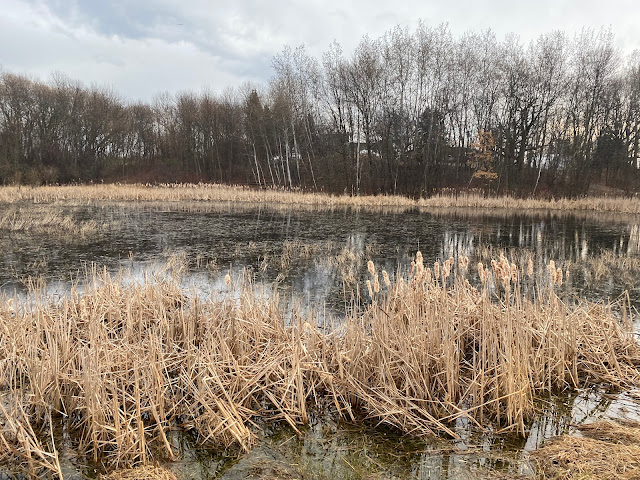 Oh, and did I mention that one of the lakes we ran past was called Otter Lake? 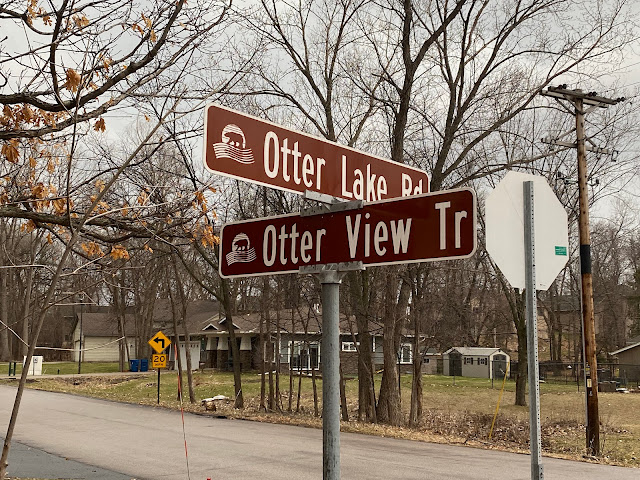 Finally we were in the home stretch, both feeling remarkably good if happy to be done. Judi and a couple of other folks welcomed us like conquering heroes -- all the more remarkable when I looked at the final results I noticed that we were some 45 minutes behind the previous finishers.
We had some water, some pancakes, and took the requisite post-race pic: On our way back to the hotel we stopped at a big grocery store (Wil wanted to find more Wisconsin Brick Cheese for Detroit pizzas). We snacked, had a dip in the pool, and went out for another walk to the local record store (it was Record Store Day!), quilt store (seriously, why do I do this???), brewpub, and cocktail lounge before heading in for the evening.
Great things about Camp Wannarun:
- I loved the option to mail in a registration form
- Excellent communication before the race
- Nice shirt
- Pretty course mostly along quiet roads, nice lake views
- Plenty of signage, mile markers every mile
- Handsome custom medal -- not just a "sticker" medal, pretty rare at a small event
- Post-race pancakes!
Thanks Minnesota, and hooray for State 38! 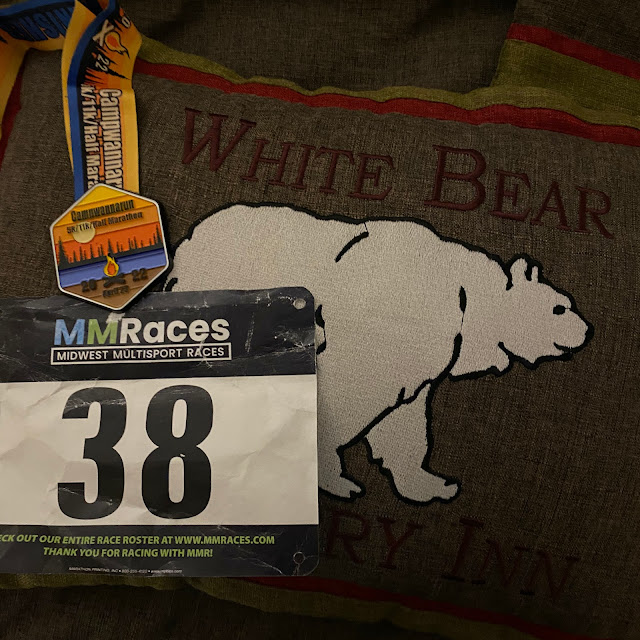 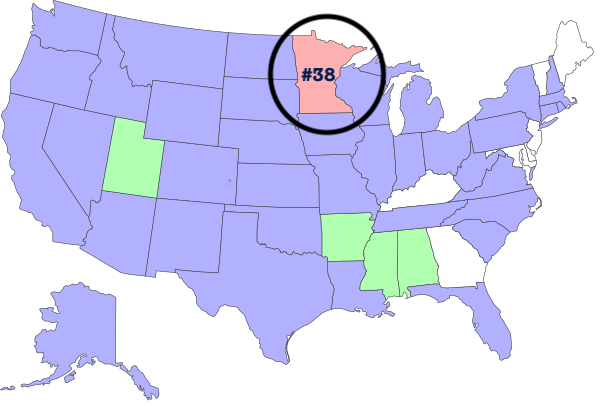