I keep an Alexa Show on my desk when I work. Ostensibly to use as a speaker when I listen to music, but really because I enjoy the random photos it shows me. Sometimes it's a bittersweet memory, like lovely pictures of Bubble. And other times -- especially the "this day in 20XX" pictures -- it feels amazing how much time has passed.
Today I was reminded about my first multisport event: the No Foolin' Duathlon, run waaaaay back in 2007, before I launched this blog. Not many photos of the day, but I thought I'd type up my notes and put the random pics in, just for fun. And, no, this isn't an April Fool's Day joke. :)

Rebecca, Barbara, and I all registered for our first multisport event: the No Foolin' Duathlon. It was held at Millersylvania State Park down near Olympia. The weather was strange -- it was actually snowing lightly about 20 minutes before the start -- but it cleared up in time.

There were very few people registered for the event, as it turned out. I was really nervous, and didn't know what to expect. I just stood at the starting line and then, suddenly, we were supposed to be running. I took off too fast -- as usual -- running through the park to the entrance, then turning around. Of course, I was way at the back of the pack, and got to watch most people head out on their bike leg before I was anywhere near done with my run.

Got on my bike -- nearly forgetting to take off my run gloves -- and rode off. The ride was okay, though because it was a small race and because I was toward the back of the pack, I was alone the majority of the time, which meant that I got distracted.
Pedal pedal pedal pedal oooh... look... a horse... what a pretty horse... I like horses... oh! Pedal pedal pedal...
Saw a man carrying a bike back; he'd gotten a flat and was just calling it a race. Also saw a woman at the turnaround who had a flat and was trying to fix it without a patch or tools. She ended up riding in on a flat tire, very slowly.
Got back to the transition area after the winners were long finished, and then had to go out for the last mile run. I had a cramp in my right hamstring, but plodded along. After 1:10 I finally made it to the finish line. Hooray!

But in the end I got a medal... my first ever running medal. And, of course it wouldn't be the last! 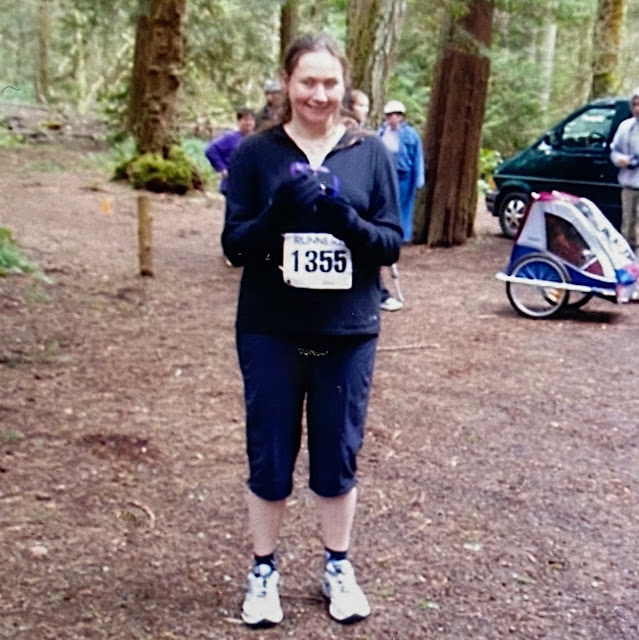 It's amazing to think that it was 15 years ago... in both the "how has it been that long??" and the "how has it only been that long??" sorts of ways.
I only ran two other multisport races, both sprint triathlons. There just seemed to be a lot of faff. But if you asked me on that date whether I thought I would run a marathon, I would have said no.
Sunny at 9:13 PM
Share