Up very early and out to the airport as we had a very early flight. Of course, it was super quiet, and we were flying first class, so we had no wait at the counter and we also made it through security in a matter of seconds.

ABQ airport is cute; we sat upstairs in a little lounge and ate a breakfast burrito before making our way to the gate. We boarded first -- of course -- and were happily settling in. I noticed a woman with a dog -- not in a carrier, but on a lead. A passenger across the aisle said, "Oh, what a cute dog!" and the woman said, "It's a SERVICE dog" and huffed past. I remember thinking, "Oh, no, it's one of those people who paid $35 online to get their pet classified as a service dog so they don't have to pay for them to fly."

But we sat there, I did some writing and some stitching, and relaxed. The flight attendants took our orders so they could start serving right after takeoff. But then we heard the co-pilot come on the PA and say "As a reminder, FAA regulations require all passengers to wear masks during the flight. To be honest, I don't care about your thoughts on the matter. So put on your masks."

We could see the flight attendants anxiously looking down the aisle from up by the cockpit, but we couldn't hear any other hubbub. But then the pilot said that there was a warning light so we would be returning to the gate to have it looked at. (Groan.) So we taxied back to the gate and, when the door was opened, the police were there.

Eventually one of the officers went down the aisle, while the passengers chatted about "why can't people just put on their masks?" And still we sat there. At some point a guy walked toward the front of the plane, accompanied by an officer. He was shouting "Okay! We put on the masks!" but it was clear his flying was done for the day. And still we sat.

The captain told us we would need to deplane. We grabbed our stuff and headed into the terminal. We chatted with a few other passengers, especially because it didn't look like the entire plane had exited.

Then more officers arrived and several minutes later, a woman came off the plane. It was the woman with the dog. She was angrily holding a big plastic cup and shouting. Her boyfriend told her to "STOP IT!" but she was on a roll. Shouting about how she had been given a glass of water (certainly not that size of one!) and "you made the entire plane gang up on me" (no... ma'am, that was you...). Shouting that COVID wasn't real, that we were all sheep, that this country is going to f'ing hell, and that THIS IS A NON-REFUNDABLE FLIGHT TO HAWAII.

The officers just kept herding her away from the gate and down the terminal. Not touching her, but just shepherding her. She was defiant at that point, but other passengers told us later that she was crying.

Apparently she had made a threat, so all the rest of the passengers were taken off the plane, and inspectors came on to check everything.

Finally, we were told we would be boarding soon. The gate crew read their spiel, saying we had to wear masks during the flight, and we all laughed.

Then back on the plane, and, 3 hours late, we left ABQ. The flight attendants were kind and said "we have your mimosas chilling!" And they did. 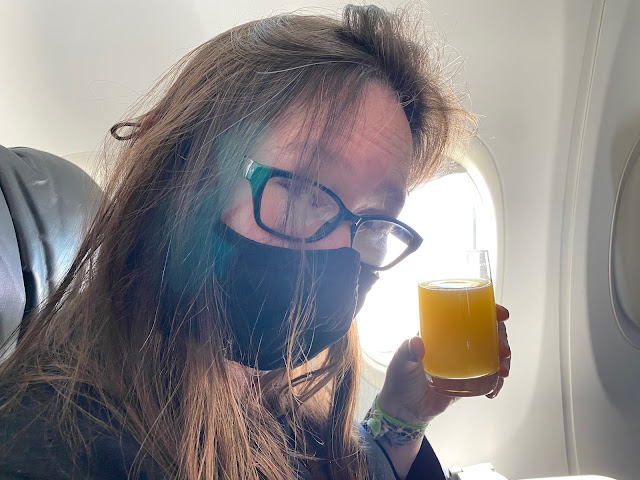 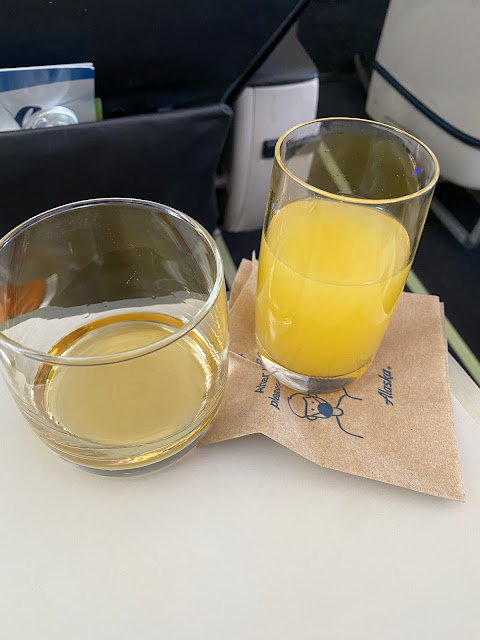 During the flight I looked out the window and saw this: 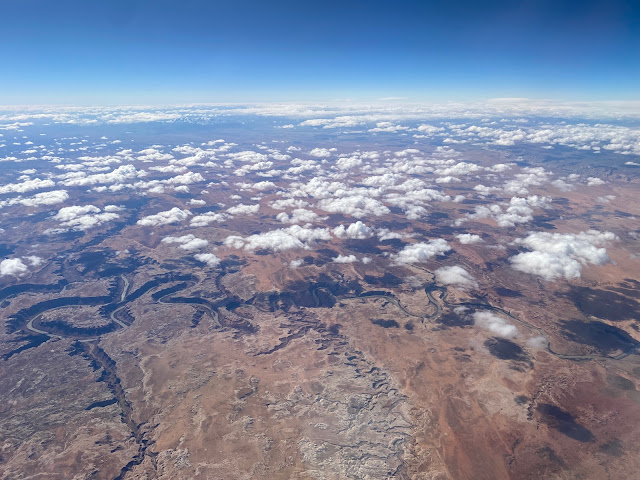 ... which reminded me of Georgia O'Keeffe's Above the Clouds, which we'd seen in Santa Fe:

I was happy to be home, but also happy that we'd had a great trip to New Mexico!

**A quick note about this post -- I'm catching up with my New Mexico memories and backdating blog posts to each day.