Ever since our little neighbor Toren was born, I had been playing around with the idea of making a banner of nautical flags spelling out his name, since his parents are boaty people.

I did a little research into which flags represented which letters, sketched out the dimensions on paper, and bought some felt. I did, however, struggle with one thing ...

WHICH WAY WOULD THE FLAGS BE ORIENTED???

I mean, if this flag was the T:

and you were hanging it horizontally... would it actually look like this?

So I referred to West Marine -- a nautical supply store with locations nearby and a well-designed, very user-friendly website. Here's their image for the T flag: 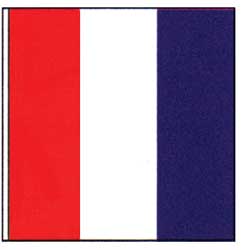 I decided that that teeny strip of white on the left edge meant that's where the "hanger" is.

I also discovered that the flags don't have to be square -- that if you wanted them as rectangles, you just stretched the design. 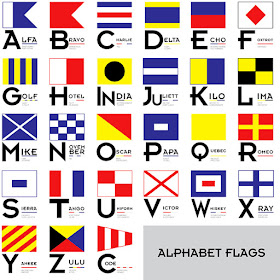 Thus reassured, I got to work, and finished the flags the day before the birthday party. One final thing -- and to be honest I'm not sure I was right.

Does this banner read T-O-R-E-N (which, if you read the flags from left to right, it does...), or, if the string of flags was hanging from, say, a mast, would it read N-E-R-O-T? #askingforafriend