Girls on the Run 5K!

Woke up early and happy to see that there was no snow this morning -- because today was the Girls on the Run 5K! Bundled up and headed over to Seward Park, which, I'm ashamed to admit, I had never really visited. I mean, we once rode our bikes there on a Cascade group ride. And in the Danskin tri, the running course took us close to that point. And in the Rock and Roll 1/2, we ran down the hill and turned past the entrance. But I'd never really entered the park. It's glorious -- sort of an inverted Green Lake -- a little thumb of land in the midst of a large lake. The running track takes you along the beach, and then (to get the distance), there's a hill up into an interior loop. Then back down and a nice flat run along the water to the finish. Very nice! 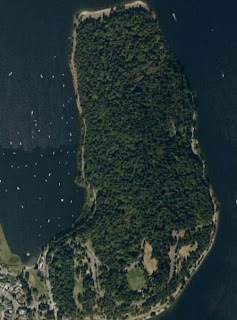 Gathered with coaches, other running buddies, and our girls in the FREEZING COLD. The girls were given hand warmers, thankfully, so I didn't have to worry about my buddy getting TOO cold. I recognized Morgan by her rainbow gloves. She gave me a hug and we did the warmup stretches together. I met her mom, very sweet brother, great aunt, and grandmother. Nice to see that she had a lot of support. Coach Carmen had tiaras for the girls to decorate... I loved that Morgan didn't want to make a tiara. Not her style at all.

As we walked to the starting line, Morgan said that it didn't matter if she came in first or came in last -- that the important part is just going out and having fun. (Go girl!) The organizers had balloon arches at the start and finish -- nice touch. It was a little crowded right at the start, but we were able to keep up a pretty good clip, alternating between running, skipping, and walking. We actually ran more that I thought we would -- certainly more than in the practice 5K. We talked about Christmas, her new kittens (they got three!), camping, books, how pretty it was there, and even running. I told her the "leave nothing in the tank" story, which she liked.

She was getting pretty tired at the end of the run, and said she wasn't sure she had very much in the tank. But we decided to sprint from the 3-mile mark to the 3.1-mile finish line. She took off pell mell -- really fast! -- but we remembered to smile and wave at her family as we sprinted past.

Her family were very sweet, even her 13-year old brother who ran up to her and said "I'm so proud of you!" That made me almost want to cry. Hooray for sweet boys! Coach Carmen gave Morgan her very cool medal and bracelet that they made with the beads they earned in the program.

We stood and cheered until everyone finished, which was great. Then I said goodbye to Morgan and her family, along with the other running buddies and coaches. It was a really nice event, with lots of cheering. Oh, and the goody bags were better than the ones we'll get at Disney World. Ha!

Another nice touch -- everyone was given bib number 1. Sweet!
Sunny at 5:54 PM
Share