Valley of the Trolls Half Marathon race report

The fact that it has taken me WEEKS to write this up has less to do with our experiences at the alley of the Trolls Half Marathon... and more to do with just the craziness of life in general. But back to the race report!

I was looking for a race that would be an excuse for a weekend away--plus a little nudge to make sure we ran a LITTLE in August. The Valley of the Trolls Half Marathon, held at Troll Haven, near Sequim, fit the bill perfectly. Inaugural event, small race, and Sequim? We were in!

Briefly, the weekend was fantastic... once we made it through the 2-hour wait for the Edmonds-Kingston ferry. We decided to stop an pick up our bibs on the way to Sequin -- always good to figure out where you're headed before race morning! So we arrived at Troll Haven... Here there be trolls: 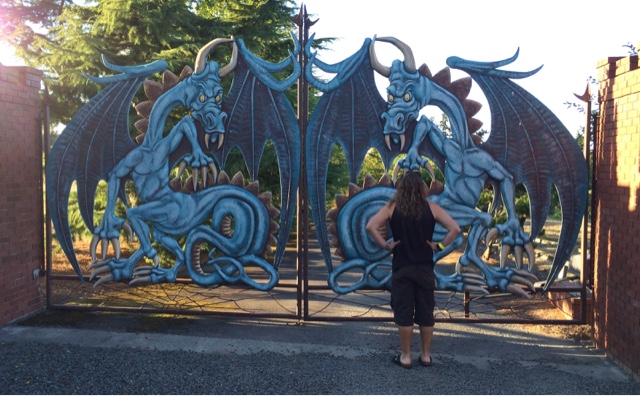 Troll Haven was lovely -- lots of odd carvings dotted around, serving as fence posts, pillars, and even a bus shelter (?). Packet pickup was easy -- we got our bibs, a wristband for a post-race beer (woot!) and a glimpse at the finisher's medal and our soon-to-be earned winners' trophies. No, wait. But a glimpse at the trophies that people far, far faster than we are would win.


Then to our home for the weekend: Dungeness Bay Cottages. These perfect little units have gorgeous views of a water, a comfy queen bed, a dining nook, a bathroom with shower, and a kitchen larger than ours, fully stocked with pots, pans, and utensils. There's even a staircase down to the water and a private beach. I'm already thinking about when we could go back for a little visit! Oh, and the sunsets...

Got up Saturday morning at a civilized hour -- SEVEN -- because the race didn't start until 9! We had time for a leisurely breakfast before driving out to Troll Haven at 8.

Parking was challenging -- we were all instructed to park in a field, but it's tough to get folks to park well... even when there are straight lines painted on concrete! But eventually we got parked, joined a ports-potty line, and then made our way to the start... which would take place THROUGH THE TROLL HAVEN GATES!!!

A local woman -- possibly the choir teacher at the high school? -- sang the national anthem, and then, with an airhorn blast, we took off. Oh, but not before we snapped the obligatory pre-race photo, with castle in the background:

It wasn't a large race -- around 100 people in the half -- and we stretched out pretty quickly as we ran through the gates, past a couple of houses (who lives here???), and other buildings, then out another et of gates. That was a little disappointing, because we had hoped for more troll action. But the course was very loopy, and folded back on itself and crossed itself, a few times. But it kept us guessing!

- Running past a big cooler with a sign: FREE PLUMS! TAKE AS MANY AS YOU WANT! CLEAN AND COLD!"

- Trolls dotted around the grounds: 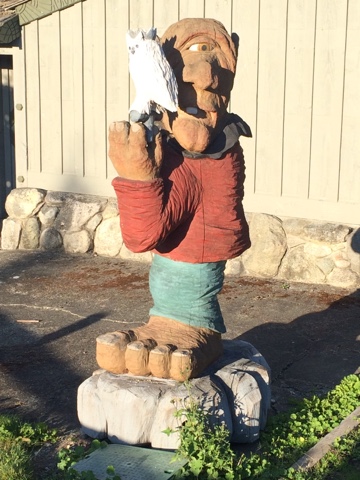 - Chatting with other runners as we passed them going the other direction, everyone checking in to see that we were all still on track. 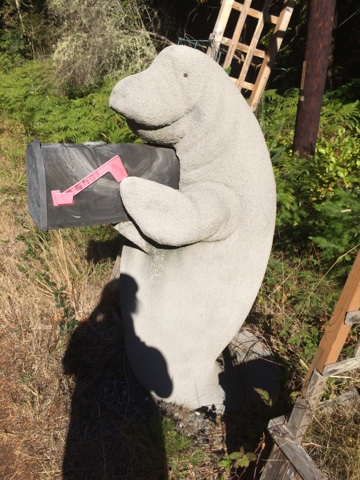 - The mer-trolls by the big barn.


- The volunteers worried we didn't have enough water. (We did.)

Oh, and the running? Make. I had a disturbing twinge under my right anklebone, again, so I took it easy. It was not a speedy performance by Team Wil-Sun. 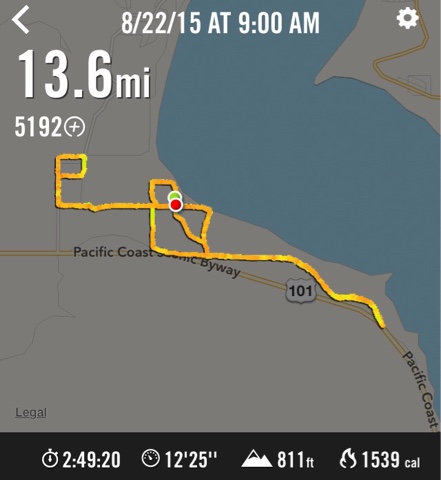 We came up the drive to the gates / finish line with a surprising amount of cheering... turns out they were just about to start handing out the awards. But the speedier folk cheered and clapped, and we got a lot of high fives. Clearly, it's all about timing.


We picked up our handsome medals, a clementine or two, and then got a mighty tasty hefeweizen (extra tasty with a bit of orange squeezed in!). We went back to listen to the awards and cheer folks on -- and stretch and relax and refuel a bit. But after we finished our beers and some water we went to the car to head back to Sequim... stopping at the farmer's market (sadly, just meh), the Front Porch store (always amazing), and Jose's Salsa, which was amazing even if I accidentally ordered waaaaay too much food.

For a small, inaugural race of course there was room for improvement. A few more signs would have been helpful out on the course -- there was one spot where we would have gone very wrong if we hadn't been helped out by some other runners. And one water stop wasn't manned or supplied, though it did have a handy portapotty. We heard some ofter runners whining about the course and too little water -- but it really wasn't bad and we've had much worse!

For the most part, however, they did things right. The runners-only zone at the finish was great -- not that we needed it by the time we finished, but still). Having good beer at the finish -- and a simple way to serve it so that everyone had just one, and there was plenty for the later finishers -- was a nice change. Simple post-race food -- bagels, oranges, bananas -- was perfect. As was having plenty of water. I also liked that we received finisher's shirts -- a nice tradition to start, rather than a participant shirt! 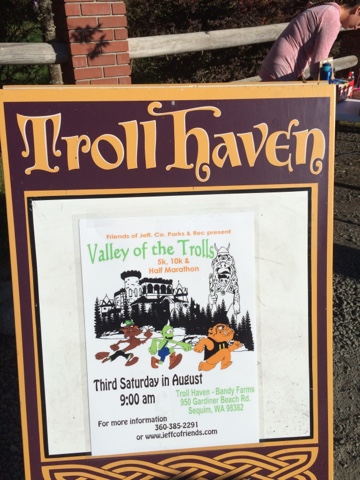 I could imagine Valley of the Trolls becoming a regular summer race for us. I've just gotta figure out the ferry situation!

The organizers have wisely decided to set next year's Valley of the Trolls Half Marathon date already: the third Saturday in August, or August 20, 2016. If you sign up before July 1, 2016, it's a bargain at $50 for the half marathon. The organizers are already promising better parking, more water stops, and -- I love this part -- TROLLS ON THE COURSE.
Also, this image doesn't do it justice, but how cute is this medal? The sky is a sparkly deep blue, the castle is surprisingly 3-dimensional, and the trolls are an additional layer. Really handsome medal!

All in all, a nice morning spent in a nice place. With trolls.