In Toronto for a few days for a photo shoot. (Really, it's much, much less glamorous than you might think...) Though I was up until 2:30 Toronto time sending files to my boss, I managed to drag myself out of bed at 5:45 to go to the gym and get a little run in. Not super fast, nor super far, but I ran just over 3.5 miles and feel pretty good about it.

Spent of the rest of the day on location, making it snow. If you've never seen snow made by a machine and blown out in huge clouds across huge spaces, I'm not sure if you've ever lived. We. Made. Snow. Wow.

While showering this morning I realized that today was the start of lent -- which made me think of something I should give up. I *should* give up Diet Coke, but as I'd already had one today, I kinda blew it. It then occurred to me that giving up "sloth" might be acceptable. Now, I have a love-hate relationship with exercise. I enjoy the results of exercise, and I enjoy being finished with exercise, but I don't enjoy it while exercising. So, though it's probably not in the spirit of lent, I shall give up my all-too-common embrace of the deadly sin of sloth... by getting at least 30 minutes of exercise every day. It doesn't have to be a run, it doesn't have to be overly formal. But 30 minutes of exercise, every day until Easter.
Sunny at 9:15 PM No comments:
Share 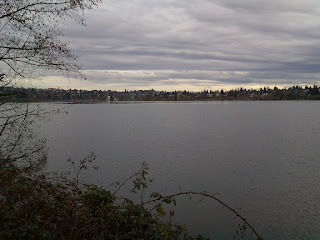 Ran at Green Lake this morning -- first time running outside in weeks. Not the best run, but a run's a run at this point. Contemplated going twice around, but just didn't feel like I had it in me. Had my usual trouble pacing myself -- I really need to work on that.
The real result of the run is that I've realized that the Motozine isn't the phone for me. I like the camera, don't get me wrong, but I am clearly no longer capable of using a predictive text keyboard to enter anything. I tried posting even just the picture from the lake, but couldn't do it. And then when I got home and fiddled with sending a message for 15 minutes or so, I was able to post... but then when I looked at the post, it had tons of weird gobbeldygook attached. Awesome! So farewell Motozine. I hardly knew ye. Next test: the Samsung Behold...
Sunny at 2:07 PM No comments:
Share

Cut the run short so that I could FINALLY try the water exercise class. I've never been to one (other than aboard the QE2, which reminds me suddenly of the terrible storm and the water in the pool pitching back and forth...). Anyway, I wanted to try it, and it was... okay. There was a substitute instructor, and I felt a little bad for her because there was a grouchy "old" woman. I say "old" because she could well have been my age -- tough to tell. But she criticized the instructor twice, which was weird, because she wasn't even really doing the move right that she said was silly. Oh well.

I'll try it again sometime; I do feel I got some good upper body and core exercise in. Happier still that I ran.
Sunny at 8:26 PM No comments:
Share

There's been a lot going on, between work and Bub being ill and me just feeling stressed out in general -- and I've been using it as an excuse not to run. Even though I know that running helps me relax, gives me time to think. Or maybe just time NOT to think.

Wil has ridden his bike to work the past two days; he said he's surprised at how easy it was, despite not having cycled in months. But, as he said, we did just run a marathon a month or so ago. So we must be reasonably fit, right?

Anyway, I packed gym clothes and running shoes in my work bag this morning. I even realized I'd left my iPod in the house and ran back for it -- figuring that I wanted to remove any excuses I might make up during the day. So instead of getting on a 28 bus, I got on an 18 and got off the bus across the street from the gym.

I had the wild idea that I might get a run in AND go to the water exercise class, but I missed my first bus from Factoria and didn't have time. (And I had thought I had until 6:30 rather than 6:05... but I didn't actually look at the schedule online.)

But I got changed and went upstairs to the cardio room. I decided to try the big room, rather than the small one, because I felt maybe my clomping along wouldn't be so obvious there. I warmed up for 5 minutes, ran at a slow 5.5mph pace for 30 minutes, then spend 5 minutes bumping up my speed .1mph each minute for a slightly faster finish. Then 5 minutes of cooldown.

I felt pretty good -- though my back feels sore again. (Weird.) I ran 4.25 miles in all, which makes that the longest run since the marathon. Kinda pathetic, but I'm going to settle for being pleased with myself for actually going and running.
Sunny at 8:30 PM No comments:
Share

back on the treadmill

Went to the gym this evening to get a short run in. Still trying to get back into the swing of it... which remains difficult. But proud of myself for getting to the gym and getting on a treadmill -- even if it was the noisiest treadmill in the world and I thought that people were staring at me. THUD THUD THUD THUD THUD. 4.03 miles, very slowly. But again, it's the longest run I've completed since the marathon...
Sunny at 11:02 PM No comments:
Share 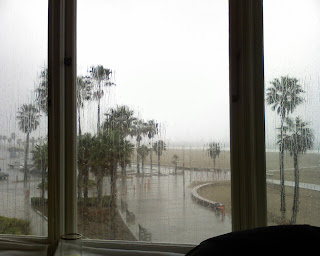 Went for a run early Saturday morning along the beach from Santa Monica to Venice in the grey drizzle. I still feel a bit out of sorts about running. I feel like a lot of things are up in the air, and it is hard to focus on anything, even running.

Anyway,ran a slow 3.02 miles. I ran two 5:1 intervals, and then ended up behind a slow-moving pace group, so ran the next 11 minutes behind them.

hard to get back in the groove

Forced myself to go to the gym on Friday after work to get a short run in -- guess those goals do make a difference in my behavior. Got on the treadmill, huffed and puffed my way through 2.6 miles in 30 minutes -- not exactly a fine performance.

My knees feel sore, and today -- 2 days later -- my right hip is very painful. I clearly have lost some flexibility -- or maybe just not given myself enough time to heal after the marathon. As such, it's hard to know what goal to set for February. I was going to put another 50 miles, but right now, if I can run 3 miles, 3x/week I'll be happy. No sense not giving myself time to rest... even though that makes me feel a bit sad.

I really thought I would be able to come back, and establish an easy 5 miles, 5x/week schedule until March or so, when I would ramp up for a spring event. But I think just getting through February and feeling better is a more rational goal.

So having just barely made my January goal (despite running half of it in 1 day...); I'm just going to put 40 miles as my goal for February. Wish me luck!
Sunny at 11:04 AM No comments:
Share
‹
›
Home
View web version