...which means it's really time to get back on track with our training as the marathon is just over 6 months away. Eek! Today I did a bit of core strength training, following a workout from Runners' World. I feel weak and a little disappointed in myself for not being as dedicated as I was at the beginning. So I need to get back into the groove. I'm always so happy and proud when I finish a workout; I just need to remember that when I'm wavering.
Sunny at 10:27 PM No comments:
Share 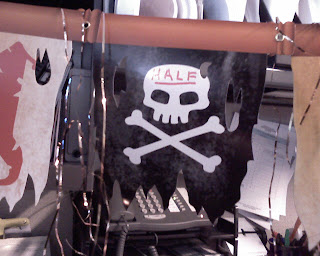 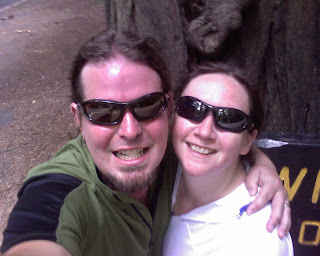 Wil and I have been on holiday all week, but we did manage to get two runs in -- 4.59 miles along the river in Portland on Tuesday, plus 4.2 miles on the Avenue of the Giants this morning. Rewarded ourselves with a Calistoga mud bath today. Tomorrow SF.
Sunny at 10:21 PM No comments:
Share

Avenue of the Giants run, take 2 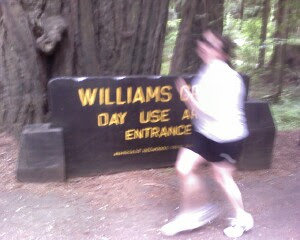 Sunny is a blur as she speeds past Williams Grove on our morning run...
Sunny at 10:11 PM No comments:
Share

Avenue of the Giants run, take 1 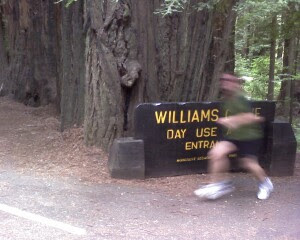 Wil in action next to Williams Grove on our morning run...
Sunny at 10:08 PM No comments:
Share

Yesterday I knew I wouldn't be able to run after work, so I went for a treadmill run at the gym in the morning. Pretty quiet -- only one other person in the room -- and I did a 5:35:5 set. I keep going back and forth on treadmills... it's so much easier than running in the real world that it can't possibly be as good of a workout. But it's also that much easier on my knees and ankles, so I can actually train a bit harder, run faster, etc. At least I know it works my cardio and gets me accustomed to moving my feet at a faster pace. My first five minutes of running were at a 5.5 mph pace, and I bumped the pace up by .2 mph at 5-minute intervals until I was at 6.3 mph, which I held for seven minutes, bumping up to 6.5 for the last three. Phew!
Sunny at 6:03 AM No comments:
Share

Nipped out for a run this morning for a quick 3 miles around Green Lake. Meant to have run 5.5 miles, but cut it short due to time and knee pain. Fretting a little about distance, but happy that our speeds are going up.
Sunny at 9:25 AM No comments:
Share

Wanted to clear my head a little before the funeral, so I went to Green Lake to squeeze a run in. Did a 5-minute warmup walk, followed by a series of 5 6:1 run:walk sets. The first one was pretty slow, felt a bit stiff. Two and three were better, and I felt I was going really smoothly on number 4. On number 5 I sped up for the last 90 seconds, running as fast as I felt I could hold, so I was pretty pleased to stop and turn around. Mileage at that point was 3.84 miles -- not too bad for 40 minutes of walking and running. Then I walked for 5 minutes to cool down and spent a long time stretching.

Ran in to Road Runner to pick up a new sensor for my Nike+; hope springs eternal (and my Nano reports that the sensor's battery is low). So let's hope it performs better. Picked up some amusing race flyers as well... Bare Buns Fun Run, anyone?
Sunny at 11:23 AM No comments:
Share

Didn't manage to get a run in yesterday, and frankly didn't feel like swimming this morning -- so I ran at the TMO gym instead. Still wanted to take it easy -- after a 5-minute warmup I ran 25 minutes at a leisurely 12-minute mile pace. Then I sped up for 5 minutes, bumping the mph for 5.0 to 5.5. Still feeling good (and having an idea from Runner's World rattling around the back of my head), I spent the last 5 minutes increasing speed by 0.2 mph every minute. The last minute at 6.5 mph was really good -- I felt smooth, I felt warm, I felt loose. Not sure I'd be able to hold that speed for a super long time, but it was nice to do.

Spent a long time stretching afterwards and still feel pretty good, even in my right foot and hip.
Sunny at 7:55 PM No comments:
Share

A compromise run today -- given our busy weekend we didn't really have time for a 5-mile run (especially given how slow I've been running!). So we drove to Green Lake, walked 5 minutes to warm up, and then ran 3 miles in a 5:1 run:walk pattern. Wil kept us going at a pretty good clip, which made it hard for me, but he said he really enjoyed running without thinking about his heart rate... which made him feel more relaxed. The first two sets were a real struggle (for me; Wil breezed right along!), but then numbers three through five were okay. We hit the three mile mark midway through our 6th cycle, so we stopped and walked back as our cooldown.

I feel pretty good about the run -- I remembered to keep my shoulders relaxed, so I felt better at the end. And we did a good job of stretching, too, so I don't feel stiff. Happy that we're back on track.
Sunny at 11:36 AM No comments:
Share

Just a quick post today -- got sad news from Lacey, which kept us feeling a bit blue all day. Decided that we really need to commit to our program again, so Wil and I went out for our Friday "walk-run -- easy" workouts -- only 30 minutes worth, including the 5-minute warmup and 5-minute cooldown. I was feeling sluggish from yesterday (must remember to stretch better!) so struggled a little on the uphills. But we ran 5 sets of 3:1 run:walks and both felt pretty good at the end. Not fast, mind you, but back on track, we hope.
Sunny at 7:16 PM No comments:
Share

Ran today for the first time since the half marathon, nearly 4 weeks ago. First injury, then holiday, then, well, life got in the way. But now I am recommitting to this training process. Slowly.

Decided to backtrack quite a bit and run-walk... 5 minute warmup walk, 5 minute run, one minute walk, repeating the run-walk cycle 5 times, then a 5 minute cooldown. I knew I was in trouble when I looked at my watch, already feeling a bit winded, and saw that I had been shuffling along for about 90 seconds. Yikes.

But I stuck with it, running back and forth, up and down the very slight hills in the hood. Various things hurt at various times: Feet? Check. Knees? Check. Hip? Check. Also felt a few random twinges and "weaknesses", which I attributed to my body thinking "What's this? Oh, yeah, I remember..."

Very tired very quickly -- even my shoulders felt tight -- but I did manage to get through 4 of the 5 cycles before deciding that discretion was indeed the better part of valour and heading home. Took a stupidly long time to catch my breath. But, hey, it's 20 minutes more than I have run in weeks and weeks. It can only get easier, right?
Sunny at 9:43 PM 1 comment:
Share

The soreness in my right foot got worse, rather than better, in the days after the half marathon. By Wednesday I was limping and in a lot of pain, so Thursday morning I went to see the sports doctor. (How big of a dork am I that it was sorta exciting to see a sports doctor?) He diagnosed severe tendonitis because of how much I pronate on the right foot. He told me he sometimes puts people in immobilizing boots but told me if I just kept off it and RICEd if for a few days I should be fine. When I saw my physical therapist the next day he did an ultrasound -- I don't actually know what it was for, but basically I lay there while the tech said "Does that hurt?" and "How are you feeling now?" while I felt nothing but giggly. And, no, my foot isn't pregnant.

Anyway, that kept me from running for a while -- though it didn't keep us from going on a glorious vacation in the southwest. It -- and the snow -- did keep us from running at the Grand Canyon, but hey. I was so careful that by Saturday morning it felt great... but then I spent the whole day wandering around Las Vegas in kicky little flats with no arch support... which set me back a bit. Apparently I need proper stability shoes all the time.

Then a week getting back to work, settled, and such... which means we've not run or done anything more strenuous than a gentle day hike since, oh, May 11. But we're back.

I spent the weekend studying and comparing and customizing various marathon training programs and plotting out our run workouts between now and January 11. Of course, I plotted them on paper and haven't forced them into iCalendar yet -- so you'll just have to trust me.

Today's workout was 30 minutes of cross training. Wil chose "mow the crazy overgrown lawn" while I chose "dust of my bike and ride it in the trainer". And while I broke a sweat for 30 minutes, Wil was wrestling the the mower, the rake, and the yard waste bin for nearly 90. Tomorrow I will go for my first run -- very mellow, a run-walk combo for 30 minutes plus warm-up and cool-down. Hopefully my foot will be okay.
Sunny at 9:20 PM No comments:
Share
‹
›
Home
View web version